The archaeological ruins of Pompeii cover around 440,000 square meters, a vast area that would take at least three full days to explore completely. Remember that Pompeii is an entire buried city with squares, temples, baths, public buildings, private villas, and shops...just a visit to the city's forum takes about an hour.

That said, you can easily follow a shorter itinerary that includes some of the buried city's most famous sites, giving you an idea of what daily life was like in this Roman city.
Here we suggest a few sites that you should include during your visit to the ruins, marking them with the same names as included on the free map provided at the ticket office and info point at the entrance to the ruins.

A Brief History of Pompeii

Pompeii was probably founded by the Oscans around the 8th century BC. This ancient Italic people settled on the southern slopes of Mount Vesuvius along the banks of the Sarno River, which was navigable at the time. Pompeii became an important commercial center early on, catching the interest of the invading Greeks and Etruscans. The Etruscans were conquered on the waters off Cuma, and the city came under domination by the Samnites in the 5th century BC.
As a Samnite city, Pompeii entered into the Nucerine League and the tufo stone city walls were both expanded and fortified, allowing the city itself to grow. Pompeii became known as an important exporter of olive oil and wine, benefiting from the Mediterranean free market under Roman protection.
After the end of the Samnite Wars in 80 BC, the city came under Roman dominance and in 89 BC Publius Cornelius Silla took up residency there along with a group of veterans, renaming the city Colonia Venerea Pompeianorum Sillana.
During its Roman period, the city reached its architectural and economic peak, transforming into one of the most popular recreational and resort towns of the Roman aristocracy. During the Imperial Age, many wealthy Roman families moved to Pompeii, and buildings like the Temple of Fortuna Augusta and the Building of Eumachia are testimony to this influx.
Under the Emperor Nero, the city was seriously damaged due to a strong earthquake in 62 AD, and rebuilding immediately began. Work was interrupted on 24 August of 79 AD by the disastrous eruption of Mount Vesuvius.

Visiting the Crater on Mount Vesuvius

A cloud, from which mountain was uncertain, at this distance (but it was found afterwards to come from Mount Vesuvius), was ascending, the appearance of which I cannot give you a more exact description of than by likening it to that of a pine tree, for it shot up to a great height in the form of a very tall trunk, which spread itself out at the top into a sort of branches; occasioned, I imagine, either by a sudden gust of air that impelled it, the force of which decreased as it advanced upwards, or the cloud itself being pressed back again by its own weight, expanded in the manner I have mentioned; it appeared sometimes bright and sometimes dark and spotted, according as it was either more or less impregnated with earth and cinders."

Excavation of Pompeii began in 1748 under King of Naples Charles III of Bourbon, who was interested in the project's prestige for the royal house and did not undertake the dig with particular scientific or systematic vigor. During the French occupation at the beginning of the 19th century, work at the excavation increased, though was halted almost completely with the return of the Bourbon kings. During this period, the discovery of the House of the Faun, with its excellent mosaic depicting the Battle of Alexander at Issus created such a stir that archaeological work began again at the site, this time using scientific methodology, careful record keeping, and plaster casting. From 1924 to 1961, work was overseen by Italian archaeologist Amedeo Maiuri and included important discoveries.
Over recent years, excavations of new areas in the site have been halted and work is concentrated on restoring and maintaining buildings already unearthed.

Top 10 Area + number on the official map in parenthesis

It isn't easy to get around Pompeii ruins with a stroller or pushchair, as the ancient Roman roads that cross the city are not navigable on wheels. Wheelchair users can follow a special marked route with the free map provided at the entrance, and the same itinerary can be followed with a stroller. Regardless, the best way to visit with infants and young children is by using a carrier or backpack. There are a number of Baby Points inside the archaeological park, which are small bungalows marked on the map. You can request keys at the park entrance and use these spaces to change and feed your infant in complete privacy.

If you have decided to dedicate a full day to Pompeii ruins, the best option for lunch is packing a picnic to eat inside the park. On the park map available at the entrance, you will find a number of picnic areas marked around the ruins. Large bags are not allowed inside, so you will have to pack your food and beverages in small bags or backpacks. Purchase your supplies in Naples or Sorrento, as the snack bars inside the park are expensive.
In Sorrento, the Salumeria Aprea (located on Via Tasso in the historic center and at the beginning of Via del Mare) makes excellent Caprese sandwiches and often has “casatiello”, a soft savory bread baked with diced ham, traditionally made at Easter. In Naples, pick up a sandwich at a cafè or take-away near the Stazione Centrale, or stop in Eccellenze della Costiera to choose some traditional sweet treats from the Amalfi Coast.

For a sit-down meal: 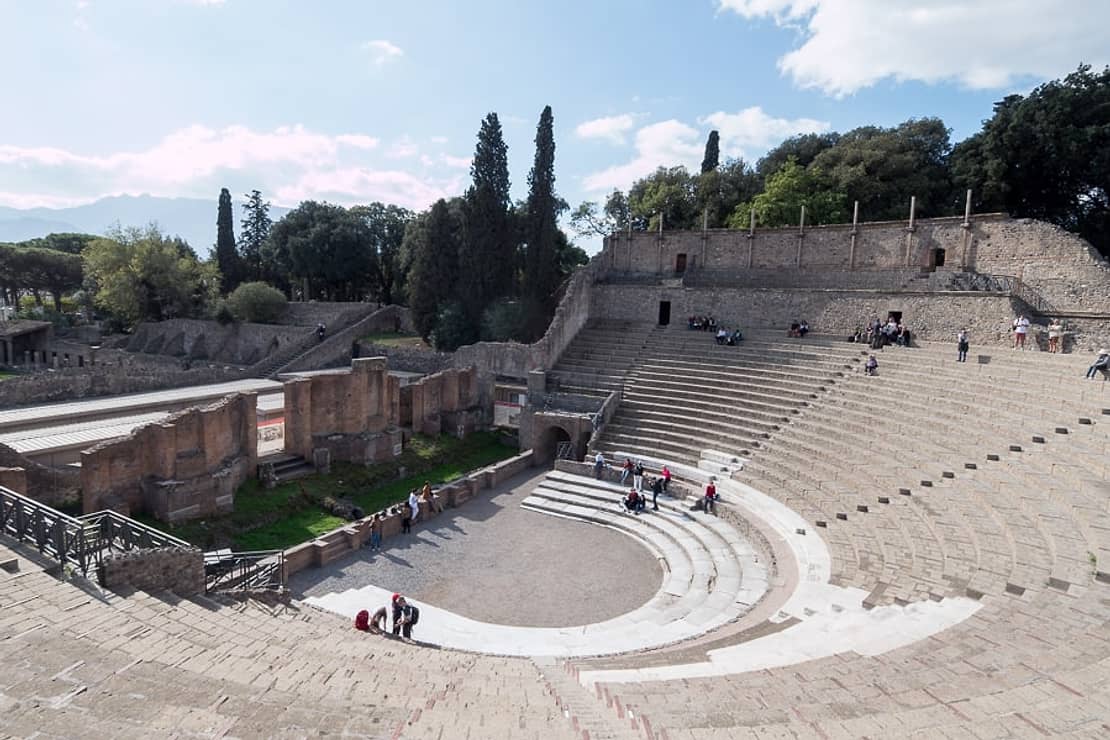 Pompeii's two theaters are located in the same area of the ancient city. The Teatro Grande (Large Theater) is an open-air amphitheater where Greek-Roman plays were performed; the smaller Odeon was used for poetry and musical performances, which required a smaller and covered space for the best acoustics. Tip: stand at the middle of the Odeon's stage and speak in a normal voice. You will hear your own voice amplified as if you have spoken into a microphone. 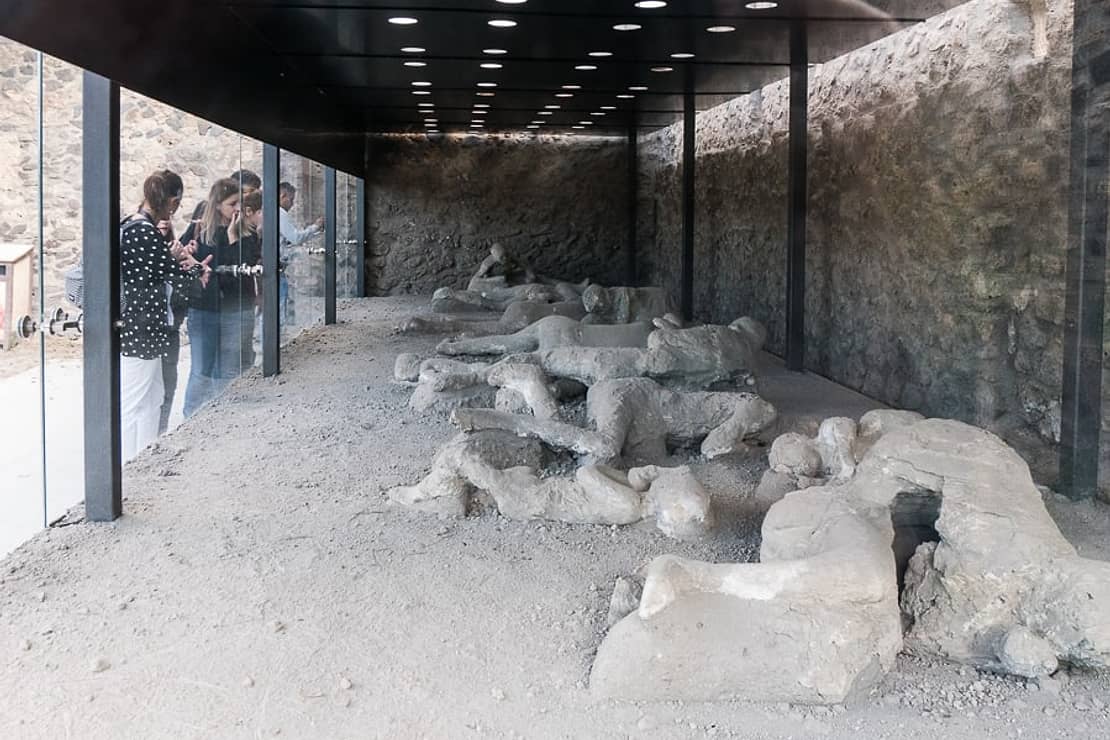 The Orto dei Fuggiaschi (Garden of the Fugitives) was an old quarter of the city that has been converted to vineyards as Pompeii grew. The name is an homage to the bodies of 13 victims of the eruption in 79 AD who were trying to escape through Porta Nocera before succumbing to the ashes and stone. Their remains where discovered during excavations in 1961-62 and 1973-74, using plaster casting methods. 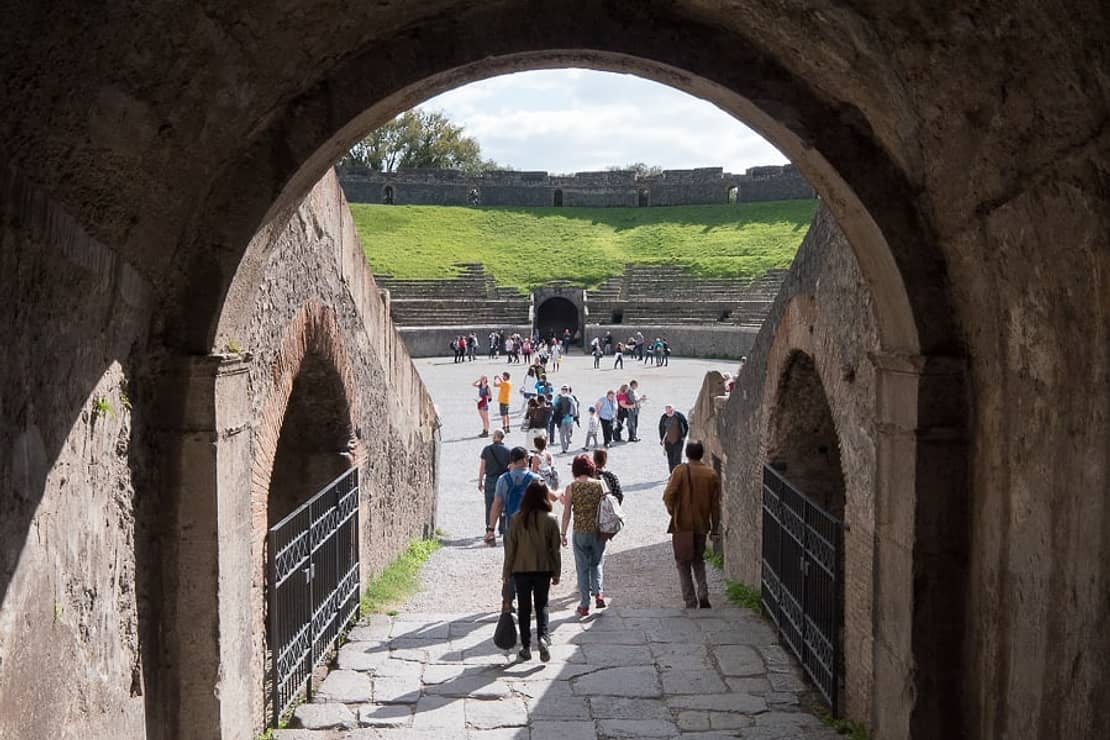 Built around 70 BC, Pompeii's ancient amphitheater is one of the best preserved in the world. Used for sporting events and gladiator battles, the space could seat 20,000 spectators in three sections of seating: the first rows were for prominent citizens, the middle rows were for the middle classes, and the summa, or the highest rows, were for the rest of the population. 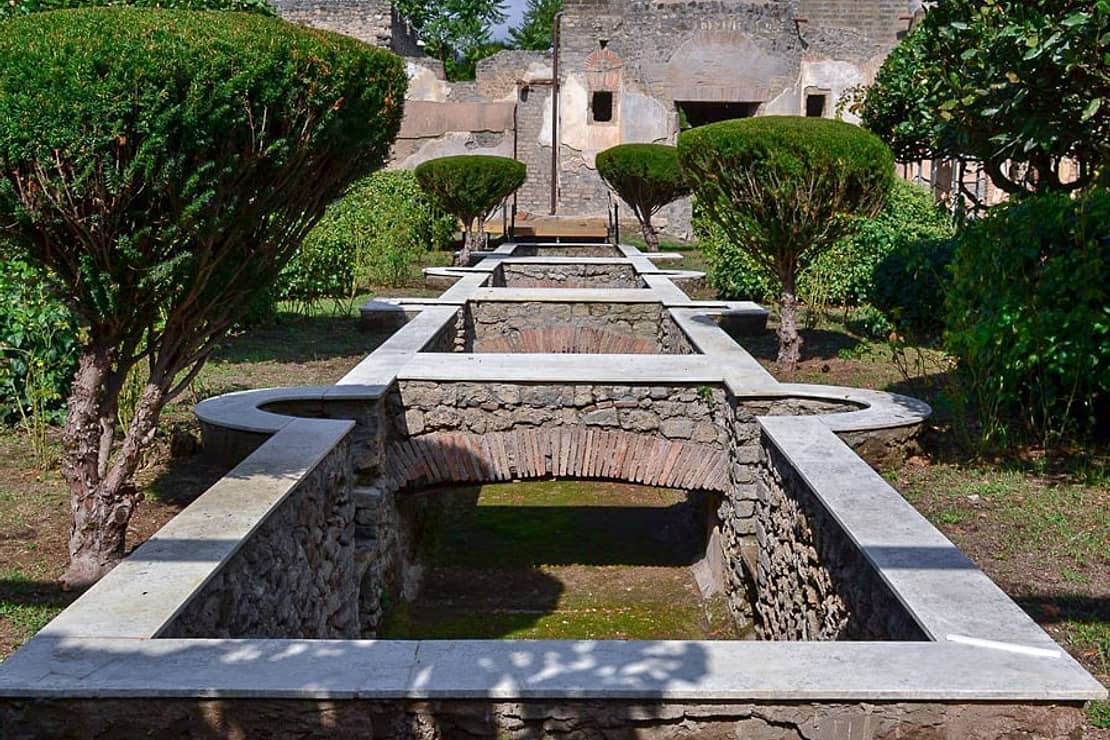 The Praedia di Giulia Felice is a large complex dating from the 1st century BC and was one of the first homes unearthed during excavations. This patrician villa has a large gardens surrounding a series of residential buildings and thermal baths. The name Giulia Felice was taken from an inscription painted on the facade after the earthquake of 62 AD (today displayed in Naples' National Archaeological Museum) in which the owner advertises that part of the property is for rent. The lavish decorations in the residential and thermal areas are particularly beautiful. 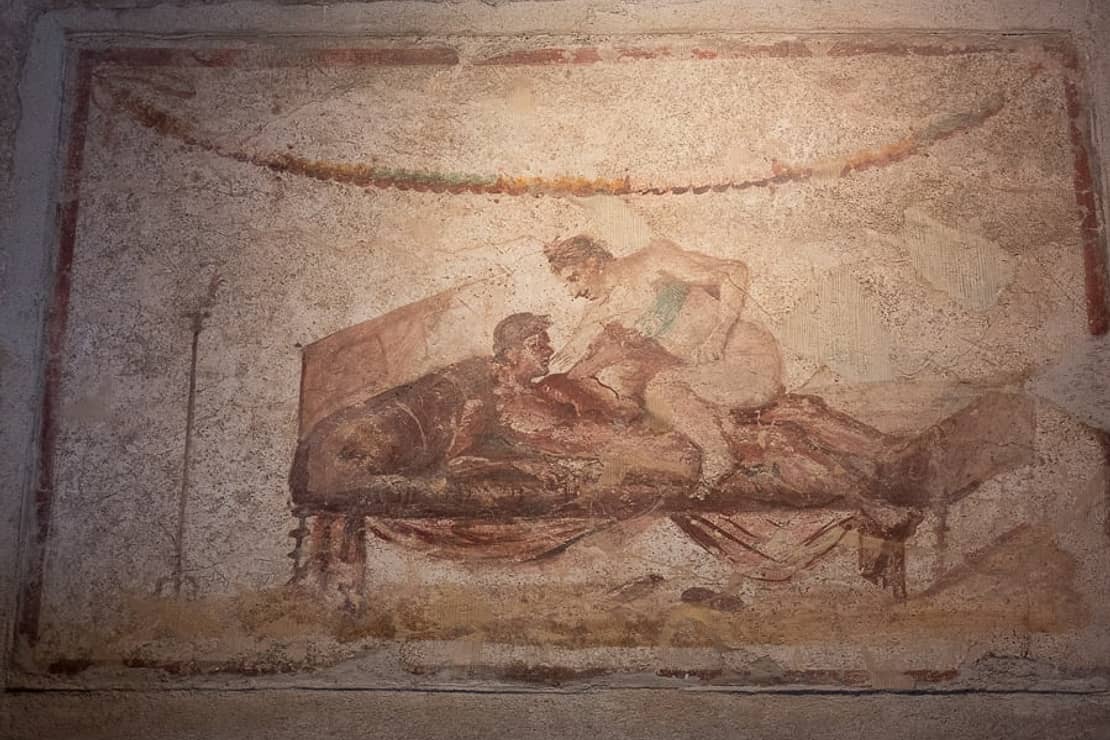 The lupanare (lupanar) is one of the most memorable sites within the ruins of Pompeii. The city's brothel was on two levels, with five small cells on the ground floor and five upstairs. Each cell had a stone bed that was topped with a mat or cushion, and above the door of each cell was an erotic fresco that probably depicted the specialization of the prostitute that worked in each individual cell. Though the brothel is located between two side streets, it was and still is easy to find by following the phallic symbols on the flagstones and facades of nearby buildings. 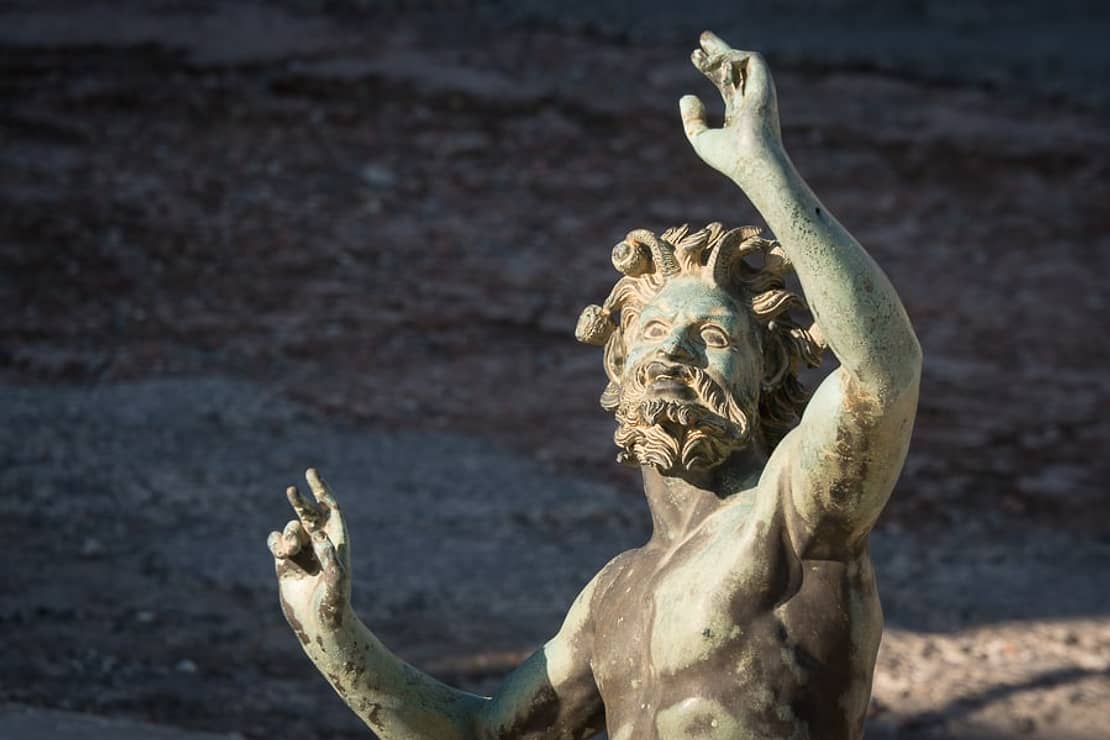 The Casa del Fauno (House of the Faun) is one of the most spectacular and largest houses in Pompeii, covering around 3,000 square meters with areas dedicated to the villa's owners and other areas for the servants. The name comes from a bronze satyr statue in the impluvium (a small pool for gathering rain water), and the villa has a number of statues, frescoes, and mosaics. Among the most famous is the mosaic that depicts Alexander the Great battling Darius and the Persians at Issus, now displayed at the National Archaeological Museum in Naples. 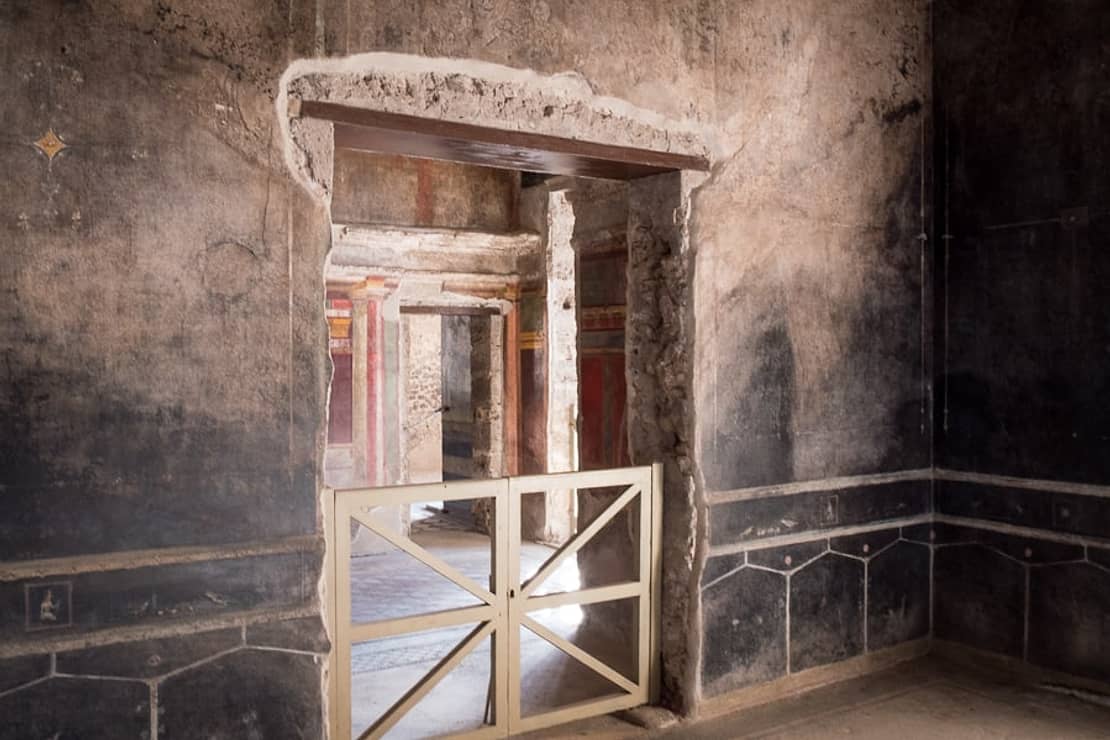 Discovered between 1909 and 1910, the Villa dei Misteri (Villa of the Mysteries) is one of the most captivating and mysterious in the entire ruins, and probably belonged to the Istacidii family, one of the most powerful in Pompeii during the reign of Augustus. The building dates from the first century BC and was built in the western residential area outside the city walls overlooking the sea. It had been renovated a number of times before the eruption in 79 AD, and is named for the Hall of Mysteries, a triclinium (dining hall) decorated with an extraordinary and enigmatic cycle of paintings,17 meters by 3 meters. The scene seems to depict a Dionysian ritual and the initiation into the cult, with the gods Dionysus and Aphrodite (or Ariadne) in the center of the rear wall. 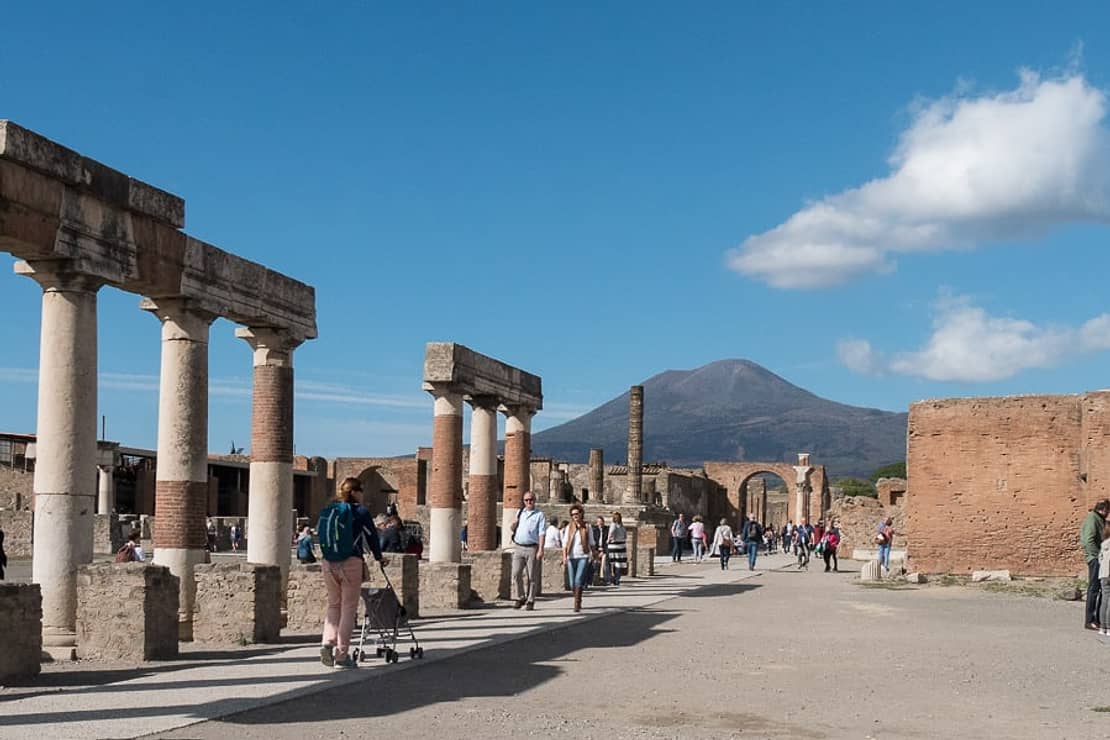 Pompeii's Foro (Forum) is one of the most striking spots in the ancient city: a large square with triumphal arches, public buildings, the basilica, the market, the mensa ponderaria (weights and measures), and temples and buildings dedicated to Apollo, to Jupiter (the head of the former statue, dating from around 80 BC, still sits here), to Vespasian, to the Public Lares, and the Eumachia building. The city's main civic, religious, and commercial activities were carried out in the forum, and, as in all Imperial cities, the space was pedestrian only and closed to wheeled vehicles. 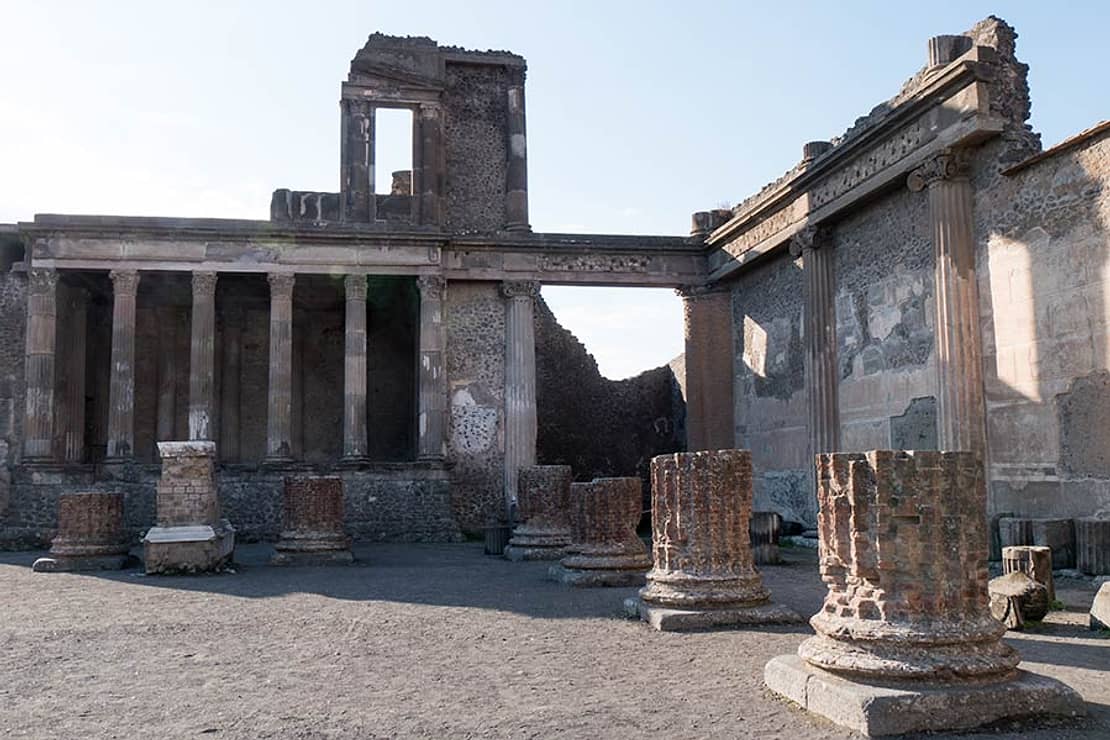 Don't be fooled by the name: in Roman times, a basilica was the most important public building in the city, used as a type of courtroom where the judge sat on a raised dais above the sides and was also where commercial contracts were drawn up. The space, dating from the second century BC, resembled a covered forum with columns and could be used for the same civic, religious, and commercial functions in case of inclement weather. 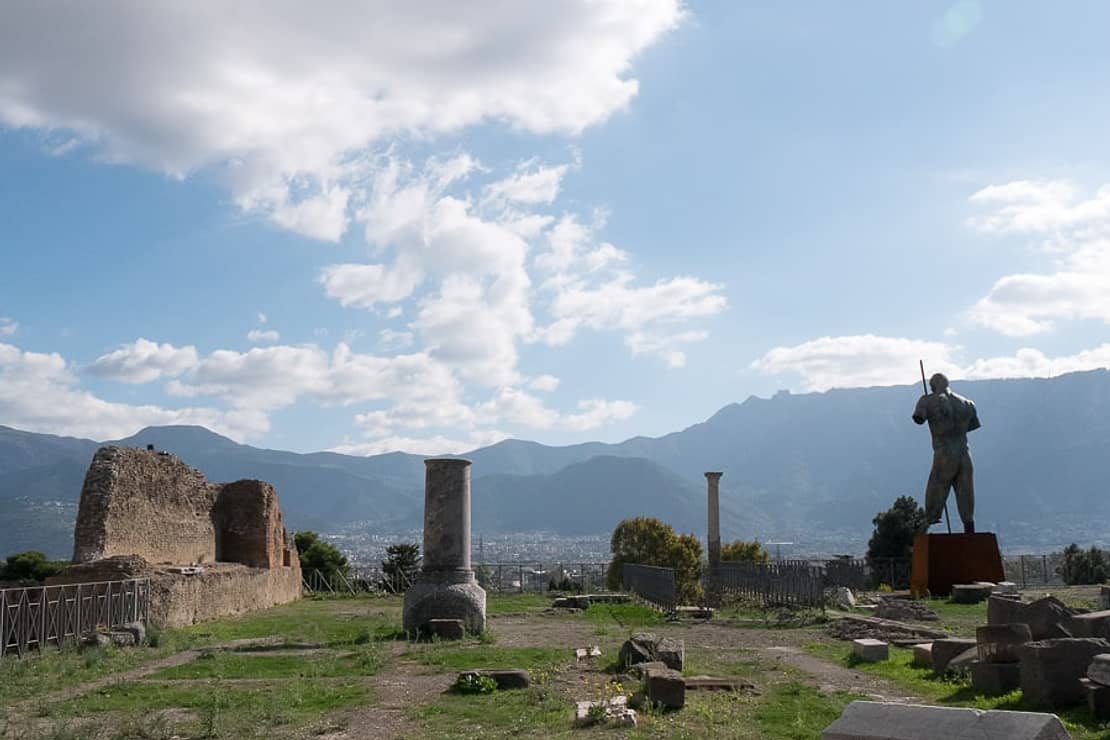 This important sacred site dedicated to Venus, protectress of the city and of navigation, was established in the second half of the second century BC on the plain of Pompeii facing the Sarno Valley and the sea. In the first half of the first century AD, the building reached its height of splendor with a series of expansions, renovations, and marble decorations. The temple housed a large gold lamp, probably donated by Nero and his wife, Poppea, to the cult, now displayed in the National Archaeological Museum in Naples.

We live here, we work here, with love

Assistance regarding tours, private transfers, bookings, and other experiences.
We generally respond within 24 hours.
We do not provide information or assistance with booking trains and buses.