As opposed to Pompeii, it's possible to visit all of Herculaneum in just a few hours. The archaeological park is ideal stop for those who have limited time but want to experience the thrill of walking in the footsteps of the ancient Romans!

Herculaneum has been preserved like no other site in the world, not even nearby Pompeii. The city was buried beneath 16 meters of ash and mud during the eruption of Mount Vesuvius in 79 AD, and this layer of detritus saved two-story domus homes with the internal architecture and décor intact, including features in wood and marble, decorations, jewelry, and even organic remains like food, providing a unique view into the daily lives of the ancient population of Herculaneum.

We suggest spending at least a half day exploring the Herculaneum Archaeological Site; follow our itinerary to see the most important buildings in the site in 2-3 hours.
In addition to an itinerary, we suggest the top sights to see along the route on this page, which are marked with the same numbers as the official map provided free of charge at the entrance to the ruins. You can also download the official map following the link below.

The archaeological site of Herculaneum is closed on Wednesdays.

A Brief History of Herculaneum

Herculaneum is named for the mythical Greek god, Hercules, who, according the legend told by Dionysius of Halicarnassus, founded the city in 1243 BC. Historic analysis, however, suggests that the city was founded by the Oscans or the Etruscans in the 7th century BC , conquered by the Samnites in the 5th century BC. In 90 BC the city was dominated by Rome and transformed into a municipium. In the final years of the Roman Republic, Herculaneum reached the height of its splendor thanks to its coastal location, clean air, and mild climate, making it a popular resort town for many of Rome's patrician families. The city was vibrant and densely populated when the earthquake struck in 62 AD, causing serious damage; work to rebuild the city was still going on when the tragic eruption of Mount Vesuvius happened in 79 AD.
The cloud of toxic gases from the eruption wiped out the inhabitants, while the entire city was literally sealed under a flow of ash and volcanic rock 16 meters deep that solidifiedi, preserving almost perfectly intact organic remains like fabric, food, vegetation, and wooden structures.

Visiting the Crater on Mount Vesuvius

The discovery of the ruins at Herculaneum was a complete accident: while a well was being dug in 1707 by order of Emmanuel Maurice, Prince of Lorraine, a number of marble fragments and statues that once decorated the ancient theater of Herculaneum were unearthed. In 1738, work began again under Charles III of Bourbon led by the Spanish military engineer De Alcubierre. In 1755, after a number of important discoveries were made, the Accademia Ercolanense was established, and was active until 1792. Excavations were suspended a number of times over the years until 1927, when the site began to explored in a more systematic way. Important artifacts were unearthed in the 1980s, along with sites like the Temple of Venus, the baths, and the ancient Greek port where the inhabitants tried to find refuge in 79 AD. The site has been home to intense excavation since 2000, especially around the Villa of the Papyrus and the library.

Visiting the Herculaneum Archaeological Park with small children can be difficult as the site's ancient Roman roads and sidewalks are not easy to navigate with strollers and pushchairs. We suggest using an infant carrier or backpack for children who are too young to walk, and leaving any wheeled strollers at the free bag check area at the entrance. Otherwise, you can follow the walkway that encircles the perimeter of the site with a stroller or pushchair, viewing the ruins from above.

Older children enjoy visiting the MAV (Virtual Archaeological Museum), located a short walk from the entrance to the Herculaneum Archaeological Park.
This museum has a virtual, interactive exhibition that recreates ancient Herculaneum as it was before the violent eruption in 79 AD that destroyed the city. There are 70 multimedia displays with reconstructions, installations, and holograms that illustrate the Herculaneum, Pompeii, Stabia, Baia, and Capri ruins in an entertaining and engaging way.

Museum tickets can be purchased at the ticket office or online.
Purchase MAV tickets online.

There are no picnic areas or restaurants/cafés inside the Herculaneum Archaeological Park. Before entering, there is a small snack bar next to the book shop where you can purchase beverages and snacks.
To eat nearby, you can walk to a number of restaurants and cafés in the immediate area for either a sit-down meal or take-away. 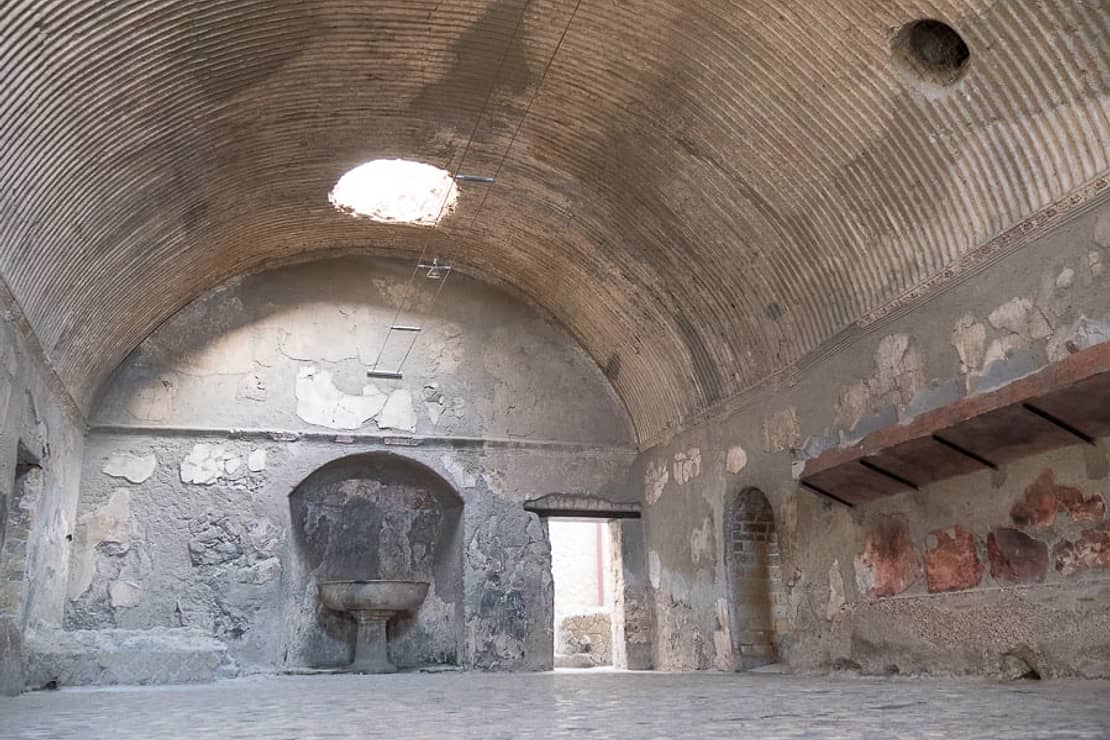 The Terme Centrali (Central Baths) date from the second half of the 1st century BC and were fully excavated in 1931. Like all baths, they were divided into areas for men (Termi Maschili) and for women. Walk through the apodyterium (changing rooms) with the wall niches to store clothing to the three bathing areas: the frigidarium (cold room), the caldarium absidato (hot room), and the tepidarium, with its beautiful black and white mosaic depicting Triton surrounded by dolphins, octopi, squids, and a cupid. 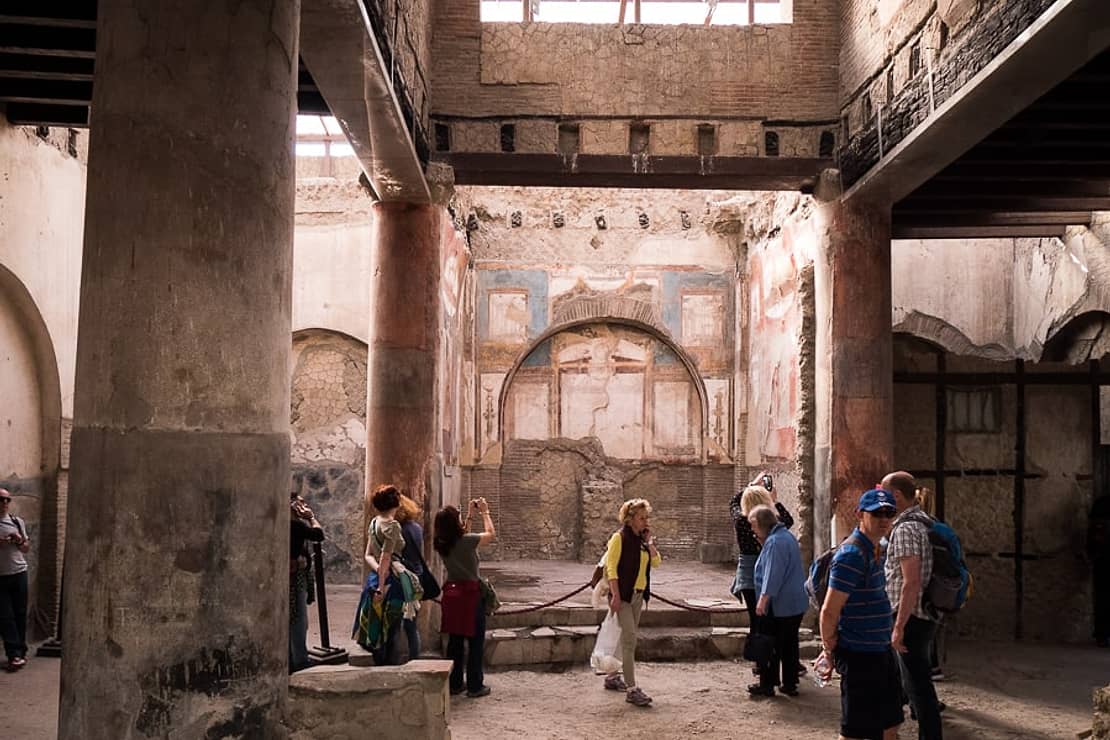 This magnificent square structure was seat to the College of the Augustales, free men who were devotees of the cult of the Emperor Augustus. Columns, arches, cocciopesto floors, and two splendid frescoes: on the left wall, there is a depiction of Hercules entering Mount Olympus accompanied by Jupiter, Juno, and Minerva; the fresco on the right wall depicts Hercules wrestling Achelous. The skeleton of the building's custodian was found in his quarters, laid out on the bed. 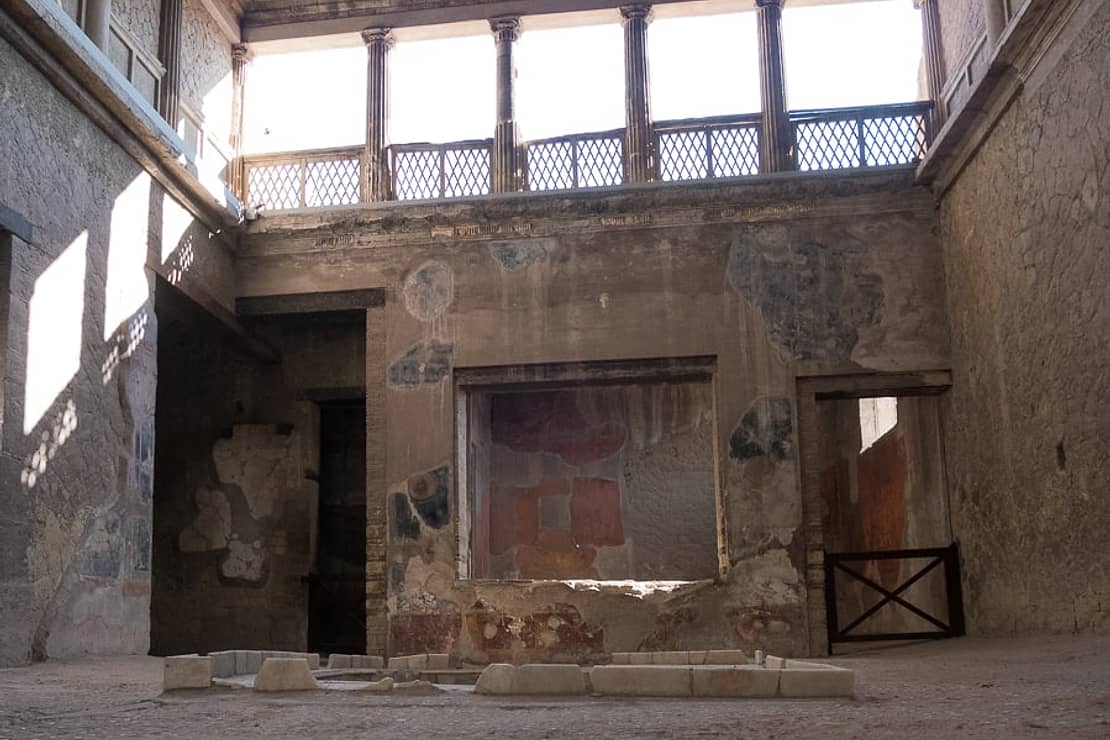 One of the oldest houses in the city, the House of the Samnites was built in the 2nd century BC and is famous for its beautiful Greek-style atrium painted in the Fourth Style (characteristic for its depiction of fantastical architecture and dramatic scenery), floors in cocciopesto, marble impluvium (rainwater pool), and a faux loggia upstairs with three sides lined in Ionic columns and the fourth (east) side open. 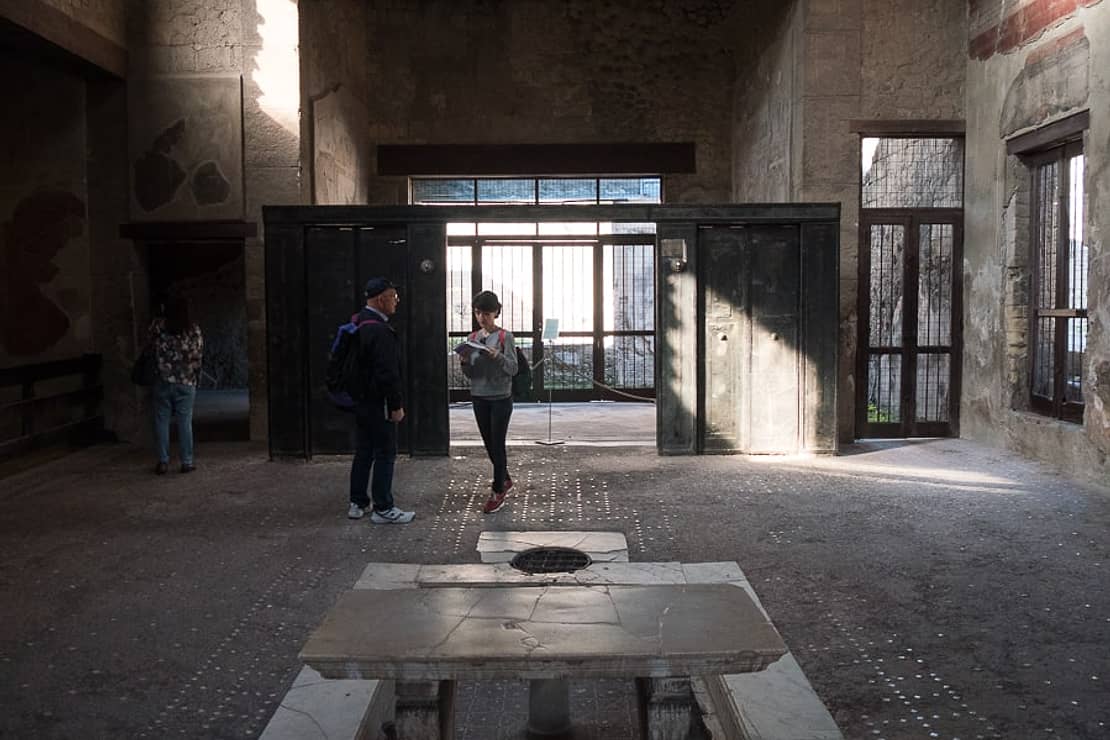 The name of this home comes from the wooden partition (tramezzo di legno) that survived the eruption and is still standing in its original location. This folding door separated the atrium from the rest of the room, lending the inhabitants privacy, and has a series of folding panels with brass handles and holders for hanging lanterns. 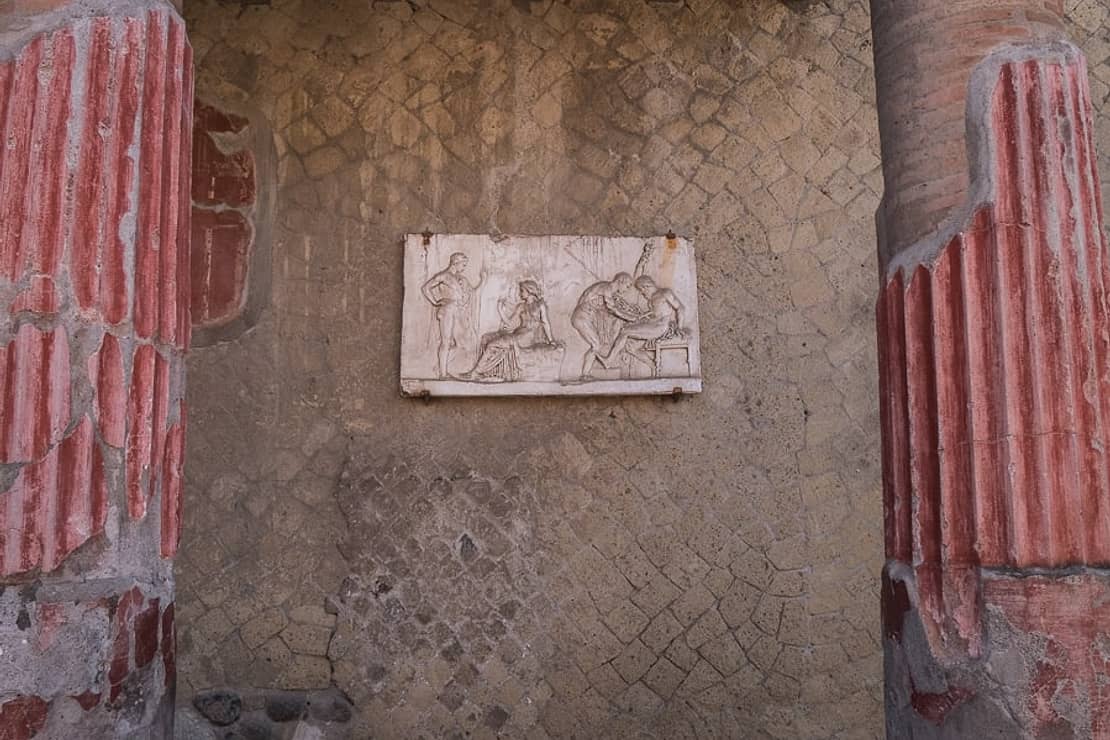 Built between 27 BC and 14 AD on the panoramic ridge overlooking the marina, this three-story home was decorated with a number of sculptures from the Neo-Attic school, including one with a relief of Telephus (Rilievo di Telefo), son of legendary found of the city, Hercules. The atrium is lined with columns supporting the upper floor, and the spaces between them were decorated with oscilla, or marble discs with reliefs of Dionysus used to guard against evil spirits. 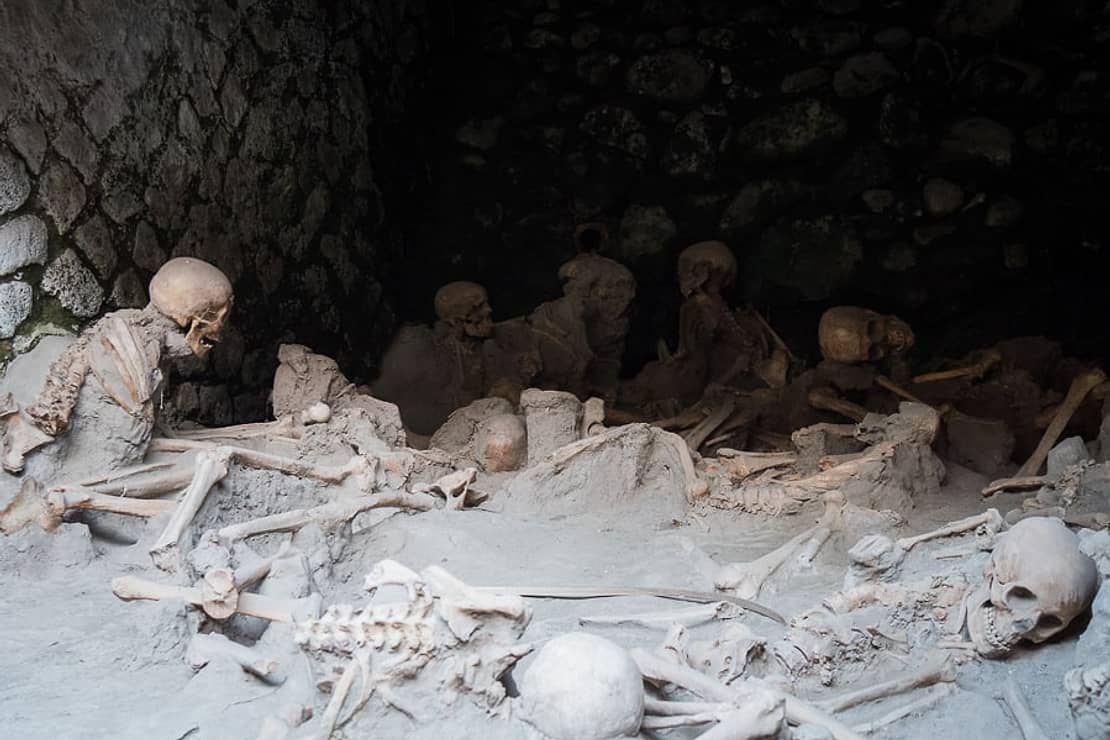 The fornici were the port warehouses (also used to shelter boats) located along the beach that was about 500 meters closer to the city in Roman times. In 1980, 300 human skeletons were unearthed here belonging to residents attempting to flee the eruption in 79 AD and killed by the scorching clouds of toxic smoke and ash created by the volcano. Along with their remains and personal objects like jewelry and coins, a nine-meter long Roman ship with skeletons of the rower and a soldier with his belt, two swords, chisel, and purse with coins were found.

We live here, we work here, with love

Assistance regarding tours, private transfers, bookings, and other experiences.
We generally respond within 24 hours.
We do not provide information or assistance with booking trains and buses.